Welcome to ByShi, Art by Shiloh!

Greeting: I don't know what to say... 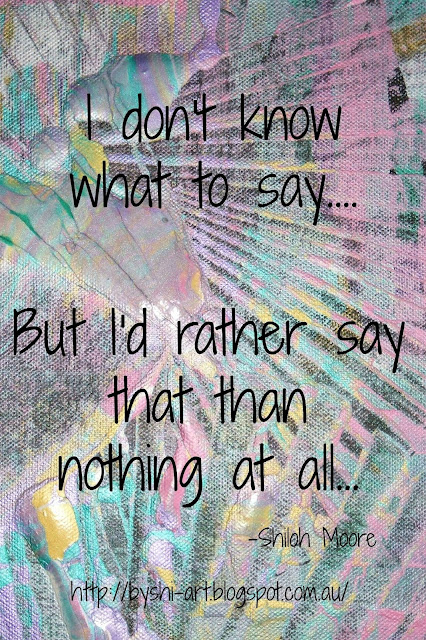 
A few friends have been going through severe times lately.  I've been looking for an appropriate card - but 'Get well soon' when you have a long term chronic illness is like a kick in the face, you know it's not going to happen (well you may improve to a better level - hopefully - but it's highly unlikely you'll recover to being fully 'well'.)  And a sympathy card is not appropriate either, nobody's died - you're still alive, life is just incredibly hard for you!  There are times when I just don't know what to say.  So I thought I'd make a card that said just that.

I know from experience, especially in the early days of chronic long term illness, that I would rather hear from somebody that they have been thinking of me rather than feel isolated not realising others cared.  Sometimes just letting someone know you care - and acknowledging there is no 'quick fix' or 'cure', but you are still there - that means the world.  You don't have to 'fix' the problem.  Just being there is important beyond measure. And if you send a card like this and don't hear back - it's most often not because it's not appreciated.  It's appreciated perhaps even more so.  So send it with no agenda for a response.  Know your efforts will be appreciated, and reciprocated in spirit if not in practice!

Email ThisBlogThis!Share to TwitterShare to FacebookShare to Pinterest
Labels: Abstract Painting, Acrylic on Canvas, Be, Be Free, Be well, Cards, Get Well Soon, Greetings, I don't know what to say..., Love, May Peace Be With You, no quick fix, Sentiments, Wishes, With Sympathy